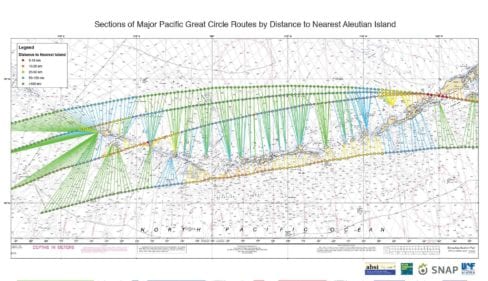 This analysis of more than 72 million vessel locations documents thousands of transits through the ABSI region, and shows that several of the major existing shipping routes pass within 25 nautical miles of key wildlife sites.

Results presented at a meeting of the Aleutian Islands Risk Assessment advisory panel in April 2014 helped inform an application from the U.S. Coast Guard (USCG) to the International Maritime Organization (IMO) for the establishment of five Areas to be Avoided (ATBAs). The proposal was approved by the Maritime Safety Committee of the IMO on June 12, 2015.

The recommendatory ATBAs went into effect on January 1, 2016, and were included on all new nautical charts produced after that date. The recommended routes that keep vessels outside the ATBAs will reduce the potential risk to seabird colonies by 17 percent, and to endangered Steller sea lion rookeries and haulouts by 21 percent, while adding less than one percent to the overall distance of the voyage between the Pacific Northwest and Asia.