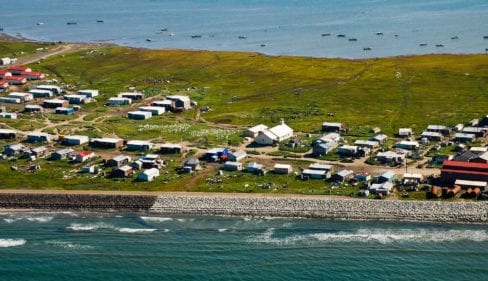 “We have to relocate by choice, rather than being forced to by evacuation. By choice, we could still retain our identity, as a culture, as a community. But unless we’re willing to do it ourselves, it’s not going to happen.” – Nora Kuzuguk in Shishmaref

The 2009 GAO Report 09-551 presents the following recommendations for Congressional consideration:

Some of the recommendations of the 2009 GAO report have been addressed. For example, while the GAO report noted that the State of Alaska designated the Department of Commerce, Community, and Economic Development (DCCED) as the lead state coordinating agency for all village relocation assistance in 2008, there was no lead coordinating agency at the federal level. On September 2, 2015, President Obama announced an initiative on climate change and village relocation efforts, stating that “the Denali Commission will play a lead coordination role for Federal, State and Tribal resources to assist communities in developing and implementing both short- and long-term solutions to address the impacts of climate change, including coastal erosion, flooding, and permafrost degradation.”

An Institutional Relocation Framework: The GAO Report also identifies the need for an institutional relocation framework to facilitate village relocation. The framework would designate one or more federal agencies to provide funding and technical assistance for relocation activities, following a federally-defined process to qualify for relocation funding and to carry out relocation activities. This agency leadership would also be able to remove regulatory or legal barriers to the relocation process. A general relocation process has been outlined through Newtok’s relocation planning efforts to date. In 2017, the U.S. Department of the Interior is coordinating a multi-agency effort with the State of Alaska to develop an Adaptive Village Relocation Framework for Alaska.

Assessment of Environmental Threat: The GAO Report noted that federal agencies have not had the necessary information or guidance that would allow them to prioritize assistance on the basis of the level of threat, until the U.S. Army Corps of Engineers (Army Corps) completed an assessment of erosion threats for Alaska communities in 2009. In its 2009 report to the Alaska Climate Change Sub-Cabinet, the Immediate Action Work Group also identified the need to “develop a methodology for prioritization of needs based on the risk to lives, health, infrastructure, homes, businesses, subsistence harvests, significant cultural attributes, and the quality of life.” The Denali Commission recently engaged the Army Corps and the University of Alaska Fairbanks (UAF) in a Statewide Threat Assessment Project to collect flood, permafrost and infrastructure data for rural Alaskan communities, analyze this data, and then develop a methodology that assigns a risk index for each threat for individual communities, as well as an overall aggregate risk index for all three threats when considered together. The National Environmental Policy Act (NEPA) requires designation of a federal lead agency to fulfill environmental analysis requirements. The Denali Commission recently took on this role for the Environmental Impact Statement addressing Newtok’s relocation efforts at Mertarvik.

Federal Funding: Although there are complex challenges involved in community relocation, the greatest impediment has been funding. The Federal Emergency Management Agency (FEMA) is mandated to provide hazard mitigation (pre-disaster) and disaster relief (post-disaster) support, but erosion is not eligible for disaster declaration under the Stafford Act. FEMA funds can be used for eligible protect-in-place projects (i.e., against storm surges) and for the acquisition and demolition or relocation of individual homes out of floodplains after a disaster, but the program will not fund community relocation. Rural Alaska communities often score low on grant applications because of their small remote populations compared to most U.S. cities. The Stafford Disaster Relief and Emergency Assistance Act would have to be amended by an act of Congress to include relocation planning or activities within FEMA’s mandate. The Stafford Act is highly unlikely be amended to enable FEMA to provide Federal relocation assistance.

Other federal resources are available to help Alaskan communities to gather and evaluate information about the risks posed by coastal erosion and other hazards. These resources are compiled into a document called the Catalog of Federal Programs which can help communities build their capacity to mitigate weather and climate-related risks, implement measures to increase their resilience and if necessary—relocate community assets. The catalog was compiled by the Arctic Executive Steering Committee’s (AESC) Community Resilience Working Group (CRWG), which includes representatives from the Executive Office of the President as well as multiple federal agencies. The AESC was established in January 2015 by Executive Order 13689, and was charged with enhancing coordination of federal Arctic policies across agencies and offices with state, local and Alaska Native tribal governments and stakeholders. The CRWG examines opportunities for improving federal actions that address the imminent threat of coastal erosion and flooding impacting Alaskan Arctic coastal communities.

State Support: The State of Alaska created the Alaska Climate Change Impact Mitigation Program (ACCIMP) in 2008 in response to recommendations by Alaska’s Congressional Delegation that the State should be a part of the solution to addressing the needs of imminently-threatened Alaska Native villages. This effort was a direct outcome of the October 2007 Coastal Erosion Field Hearing held by Senators Stevens and Landrieu in Anchorage, and a November 2007 Roundtable on Coastal Erosion/Village Relocation held by Senator Stevens in Anchorage.

While the State’s fiscal shortfall makes it unlikely that the ACCIMP will receive funding in the near future, the State is pursuing alternative means to achieve similar outcomes of the ACCIMP through FEMA’s Risk Mapping, Assessment and Planning (Risk MAP) Program. In 2017, the State of Alaska prioritized a new focus of the Risk MAP Program to provide assistance to imminently-threatened Alaska Native villages through the study and analysis of local hazards and providing risk assessment tools to inform local decisions in the adaptation planning process. While relocation is perhaps the most extreme decision on the adaptation planning spectrum, local hazard study and assessment combined with local knowledge is critical to ensuring informed local decisions to relocate or protect-in-place.